Waltzes are favorites the world over, especially such popular selections as, “The Blue Danube,” “Tales From The Vienna Woods,” and “Wine, Women and Song. ” By their compelling rhythm, they can send a dancing couple twisting and turning most gracefully ’round and about the ballroom dance floor.

What would happen to our sense of rhythm if any of these familiar tunes were altered to shift the beat to the introductory note?  Could a dancing couple continue swirling to the uplifting beat of the 3-quarter note rhythm?  Of course not!  It would cause outright confusion!  Such is absolutely the case with most of our pipe tunes in 3/4 time, namely, retreats.  For some unknown reason, the majority of these tunes have been written as if they had no introduction.  One is to begin playing without any feeling, expression or meaning, simply by attacking the first note of the introduction as if it should have the emphasis of the first beat of the tune, -which it doesn’t.  An instructor will advise his or her students saying, “play the way the notes have been written and don’t question why the bars are where they are.”  One is told, “That is the way composers wrote them, and that’s the way we pipe-majors say these tunes are to be played, regardless of what you think about the inaccuracy.  Besides, many of our band pipers are too old to change the way they’ve been playing!”

Music in three-quarter time includes waltzes, retreats and some hymns.  The most familiar of all hymns in 3/4 time is certainly “Amazing Grace.”  Now, even that beautiful hymn has been adulterated and made to suffer from having been poorly rearranged for pipe bands.  The introductory note has been made the first note of emphasis for the hymn.   One just steps off with the left foot on the first note.  It “shivered my timbers” to see The Black Watch out of step on this hymn.  It is written correctly below. 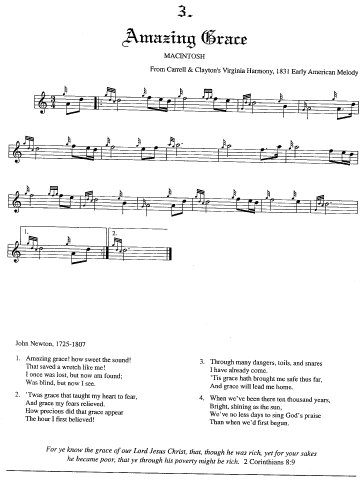 Settings of well-known retreats written by conscientious regimental pipers for pipe bands have been accepted as standard.  For the sake of accuracy, and to produce the best sounding music, correction should be made in nearly all of these retreats, to make their introductions specific.  There must also be a first and second ending; the first one having a half note and two eighth notes of the introduction, with the second ending having a dotted half note, to finish the tune with three beats.

Consider for example, “The Green Hills of Tyrol,” keeping the words in mind while playing.  Listen as you play the words of the second verse- “Because those green hills are not Highland hills.” The first three words, played by the two introductory notes are an introduction, and this puts the natural emphasis on “green hills,” on the left foot.  In the generally played version of the tune, a piper will be on the right foot for “green,” not the left.  Automatically, the soloist or a whole pipe band is out of step!  This does not produce an acceptable performance and it is quite disconcerting to pipers who know the difference!  In a conversation with a concert trumpet player, he agreed by saying, “It would drive us musicians nuts!”

One should begin “The Green Hills of Tyrol” by playing the introductory notes on the right foot and leading off with the left, on “C.”  This makes a considerable difference in the feeling when playing the tune!  When completing the tune, it’s natural and correct, to hold the last note for 3 beats.  The music is usually written with 2 beats given to the last note, while it is correct to play three, with that last note being the only one in the bar. 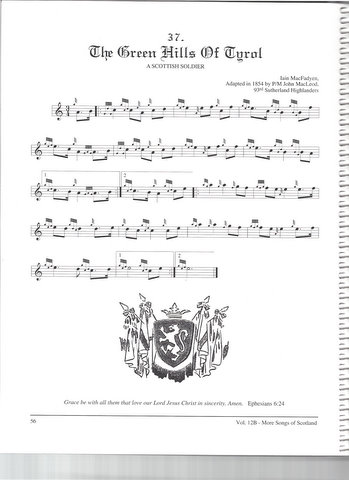 The same analysis holds true in starting “When the Battle’s O’er,” and the words can be used as a guide.  From there on, the 3/4 time feeling of the tune falls into place, which causes one to emphasize the beat.  A piper should have the feeling of holding the notes that require emphasis on the left foot.

Several three-four tunes, now my favorites, offered no sense of satisfaction at one time, simply because they were not started correctly and could not be given the correct expression.  “Marche du Petre,” for example, written with one introductory note, actually requires three introductory notes.  They are counted out, “and three and one”  “One” will be the first beat in the bar, the quarter note, “F.”

Other familiar three-fours as examples, should be corrected.  They are, “Heroes of Oosterbeek,” “Castle Dangerous,” “The Dream Valley of Glendaruel,” “Pipe Major J. K. Cairns,” “My Land” and “Balmoral.”  There are many more.  They will sound better and pipers will enjoy them once they are played with these changes in mind.

It would be lovely to have a book “Retreats, Waltzes and Other Three-Fours” to contain corrected music for all 3/4 time tunes written for bagpipes, all neatly standardized for pipe bands.  For now, pipers should be satisfied to have a few of their most familiar and favorite retreats arranged so they can be enjoyed and played compatibly with other bands and within medleys.  Pipers will become mindful of how retreats should be played, and be able to correct the ones with which they are familiar.  It should be noted that the last bar should consist of one note that requires 3 beats and it should not be cut off with only two.

This article’s mission will have been accomplished when both old and new retreat compositions, along with hymns in 3/4 time, are played with the correct “Three-quarter time feel,” and pipers will be marching with emphasis on the left foot.  Other objectives of this Blog, “Piping With A Purpose,” will have been met in the same way.

I encourage you to make the adjustment in playing music in 3/4 time, using introductions where they are intended.  You will enjoy them immensely.